This morning, I was listening to a podcast called You Have Permission.

I am also listening to the Audible version of Braiding Sweetgrass: Indigenous Wisdom, Scientific Knowledge, and the Teachings of Plants by Robin Wall Kimmerer.

As part of our Living Systems Collaboratory session today, we were meditating on a story of life and death and the realization that we are not separate, but we are one.

Then, we were in a breakout room with one of the creators of SAME Community, Rūta Danytė, discussing living systems principles in science, philosophy, and spirituality.

On Friday, I shared a couple videos with my mother.

“For the Trimtab Space Camp course with Buckminster Fuller Institute, we are watching a YouTube video featuring John D. Liu and his work with Ecosystem Restoration Camps. It is very inspiring. If you are looking for ideas for camps that bring people together to restore the land, this looks amazing.”

My family owns property on Vancouver Island. The business ventures that my brother has been managing on these properties are facing a crisis, given the restrictions on public gatherings and events during a global pandemic.

My mother replied, “Hi Stephen, How can we have a restoration camp on the Island?”

I appealed to what I knew was her heart for the family and for her connection to gardening and growing food in her backyard. And her love of scripture.

“That is what I was thinking. Our family needs a restoration camp. By learning together how to regenerate the soil by creating a regenerative agro-forest on the land that is available to us, we can learn to reconnect with ourselves, with each other, and with the living systems of the earth.”

“Similar to A Rocha, we can connect with organizations such as this to learn how to move away from a harmful relationship with the land to one where we help restore and heal the land.”

“It reminds me of the songs that I remember from childhood at St. Margaret’s. ‘And the ransomed [redeemed] of the Lord shall return, and come to Zion with songs and everlasting joy upon their heads: they shall obtain joy and gladness, and sorrow and sighing shall flee away.’”

“I forwarded it to Rob. It’s very timely.”

Today, (a few days later) she wanted to talk with me.

“Hi Stephen, can you let me know when I can phone you. I m excited about what you sent me.”

Meanwhile in the Apartheid State of Canada

Justin Trudeau, Public Relations Representative for the Canadian Petrostate, released a statement on the day of Biden’s inauguration, expressing disappointment about Biden’s decision to cancel the Keystone XL Pipeline.

So, I publicly stated for the record my opinion of his moral failure.

Justin Trudeau is the face of white supremacy in Canada, supporting the U.S. military-industrial complex at the expense of being decent human beings who recognize the damage that fossil fuels have had on the climate and as contributors to war and genocide. #CanadianGenocide

Canada is not a democracy. The law in Canada is authoritarian capitalism. Prime Minster Justin Trudeau is this generation’s Neville Chamberlain. Alberta is Poland. Trump is Hitler. The purchase of the Trans Mountain pipeline is the annexation of Alberta.

Political Will and Leadership

There is no such thing as political will and leadership in Canada. If you hadn’t yet noticed, Canada rules through bureaucratic intransigence. Genocide has been a winning policy for 153 years, and has been successfully exported to such capitalist authoritarian societies, such as Nazi Germany and Apartheid South Africa.

Let us remember that British Columbia is neither British nor a legitimate claim of Christopher Columbus.

RCMP are armed and violent invaders of unceded Indigenous territory.

Rule number one: don’t kill people to steal their land and force your colonial theft and extraction projects on Indigenous peoples, implicating the entire nation in the ongoing #CanadianGenocide.

Design Science Is an Alternative to Politics

As Fuller said, “Our survival won’t depend on political or economic systems. It’s going to depend on the courage of the individual to speak the truth, and to speak it lovingly and not destructively.”

In Fuller’s view, politics was doomed to failure—“ever more wasteful, warring, and inherently vain,” he said—and ultimately incapable of solving humanity’s basic economic, ecological, and social problems. Instead, he sought to shift from weaponry to livingry by sparking what he called a design science revolution to make the world work for everyone.

He reminded us that we are all geniuses. That the power of the individual can not be overstated. That we all must act as if the world and all its inhabitants were depending on our every action. He considered himself as just a unique bundle of experiences with no more skill than anyone else. And I ask you to step into those same shoes. What is it you are uniquely capable of?

The Role of Artists

“Today, it is becoming more and more evident, that the major problems of our time, energy, environment, climate change, economic inequality, and now the COVID pandemic, that these problems cannot be understood in isolation. They are systemic problems, which means that they're all interconnected and interdependent. They require corresponding systemic solutions, solutions that do not solve any problem in isolation, but deal with it within the context of other problems. Over the last few decades, the research institutes and centers of learning of the global civil society have developed and tested hundreds of these systemic solutions all over the world. And in our textbook, we dedicate about 60 pages to a discussion and review of the most important and most effective of those systemic solutions. They include proposals to reshape economic globalization and restructure corporations, new forms of ownership, that are not extractive but generative, a wide variety of systemic solutions to the interlinked problems of energy, food, poverty, and climate change. And finally, the large number of systemic design solutions, known collectively as eco design, which incorporate the basic principles of ecology. My conclusion, from this extensive review of existing systemic solutions is that the new systemic understanding of life has given us the knowledge and the technologies to solve our major problems and build a sustainable future. What we need now is political will and leadership.”

“Well, in conclusion, let me come back to the important role of artists in the current shift from the mechanistic to the systemic understanding of life. Systems thinking, as I've mentioned, involves a shift of perspective—from the parts to the whole, from objects to relationships and patterns. Conventional science has concentrated on measuring and on quantities, but relationships cannot be measured. They need to be mapped. So, there is a shift from measuring to mapping—to visualizing—from quantities to qualities. This is a very important part of studying patterns. And this is the reason why, throughout history, artists contributed significantly to the advancement of science by studying patterns. Perhaps the two most famous examples are Leonardo da Vinci in the Italian Renaissance, whose entire science can be understood as a study of patterns, and the German poet, Goethe, in the 18th century, who made significant contributions to biology through his study of patterns.”

“My work in environmental education has convinced me that there’s hardly anything more effective than the arts—the visual arts, music, or the performing arts—for developing and refining our natural ability to recognize and express patterns. When you look at the arts, you soon realize that it’s all about patterns: patterns of music, patterns of movement in dance, patterns of the composition of a painting, patterns of plot in a novel, and so on. So the arts can be a powerful tool for teaching systems thinking. And of course, in addition, the arts have an important role by injecting an emotional dimension that is essential to learning and especially essential to transformative learning. What we need today is learning not only in terms of absorbing new ideas and new concepts, but transformative learning that really changes ourselves, our being, and that has a strong emotional component which the arts can provide.”

“Well, let me end with a few words about the unique synthesis of art and science, developed by Leonardo da Vinci in the 15th century. During the Italian Renaissance, I spent 10 years studying Leonardo's famous notebooks, in which he discussed his scientific observations and theories. And I came to the conclusion that Leonardo da Vinci was a systemic thinker. Understanding a problem, for him, always meant connecting it with other problems. So understanding your phenomenon meant connecting it with other phenomena through a similarity of patterns. Nature as a whole was alive for Leonardo, and he saw the patterns and processes of the microcosm as being similar to those in the macrocosm. The unifying conceptual threads that interlinked his knowledge of macro and microcosm, where life's patterns of organization, its organic structures, and its fundamental processes of metabolism and growth. In the macrocosm, the main themes of Leonardo's science were the movements of water and air, the geological forms, and transformations of Earth, which he saw as a living being—the living Earth—and the botanical diversity and growth patterns of plants. In the microcosm, his focus was on the human body, which he considered an animal body, as scientists still do today. Its beauty and proportions, the mechanics of its movements, and how it compared to other animal bodies in motion, in particular to the flight of birds. Leonardo did not pursue science and engineering to dominate nature, as Francis Bacon would advocate a century later. He had a deep respect of all life, especial compassion for animals, and a great awe and reverence for nature's complexity and abundance. While being a brilliant inventor and designer himself, he always thought that nature's ingenuity was vastly superior to human design. And he felt that we would be wise to respect nature and learn from her. And in this, he anticipated the disciplines known today as ecodesign, and biomimicry.”

“This, in my view is the main reason why Leonardo’s legacy is immensely relevant to our time, as we recognize that our sciences have become increasingly narrow in their focus, unable to understand our multifaceted problems from an interdisciplinary perspective, and dominated by corporations more interested in financial rewards than in the well-being of humanity. We urgently need a science that honours and respects the unity of all life, that recognizes the fundamental interdependence of all natural phenomena, and that reconnects us to the living Earth. What we need today is exactly the kind of synthesis of art and science that Leonardo da Vinci anticipated and outlined 500 years ago.”

I was chatting with my daughter.

“What do you think of a venture where we learn how to grow our own food and feed artists, scientists, and designers as they learn how to restore ecosystems?”

She replied, “That sounds absolutely amazing! I hope something like this will work.”

I answered, “A year ago, I probably would not have considered it. Now that I know people who know how to do these sorts of things, I am wondering what could happen if we experiment with the possibilities of cultivating a healthier relationship to the Earth. If my parents and my brother are considering that as a possibility, I just might have to try it.”

Everything is interconnected and interdependent. 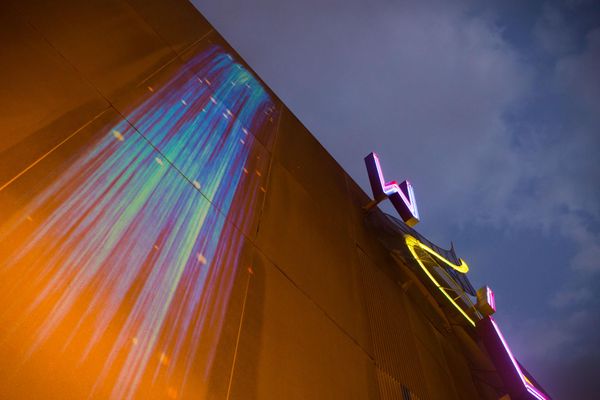 Poetry works by contradictions, qualifications by metaphor, wherein there are overlappings, discrepancies, and contradictions. Paradox is related to irony and to figurative language.

It is possible to become blinded by the rate of change, the frequency of the data, and the limitations of our cognitive and emotional abilities to be able to discern the patterns and to see the big picture.